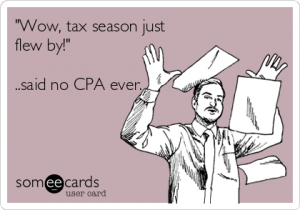 Today is the day, friends. Breathe easy. It is April 18th. Congratulations to all of you! You’ve made it through another tax season! It may not be a nationally recognized holiday, but we know that it is certainly a day to celebrate. We hope you spend at least a few days doing something fun (We’d suggest sunny beaches and drinks with tiny umbrellas, binge watching Netflix, sleeping, to name a few)—you’ve earned it!

And to help you celebrate the end of tax season and ring in “CPE season,” we invite you to use code: ByeByeTax18 at check out to receive 30% off of your entire purchase! Offer good through 4/20. Feel free to share with your colleagues and friends!

Enjoy the day! Enjoy the discounted CPE! Happy “Day After Tax Season” to all!